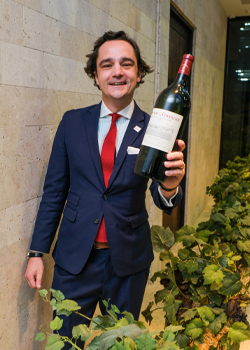 THE WINES of Pessac-Leognan have their own Grand Cru classification (prior to 1987, the wines from Pessac-Leognan were known more broadly as wines of Graves) like their more illustrious Medoc counterpart. The Graves classification officially took its place in 1953, almost 100 years after the first Bordeaux classification of 1855. The original version had some revisions and was reestablished in 1959, and this 1959 Classification is pretty much what it still is today.

Chateau Haut-Brion, one of the 1855’s original classified first Growths, also got its de-facto top billing in the 1959 Graves Grand Cru ranking, as it was sort of looking like a guest entry in the otherwise exclusive Medoc classification of 1855 prior to Graves’ own classification. Pessac-Leognan is located at the left bank of the Garonne River and just south of Medoc.

The 1959 Graves Classification gave 16 wineries Grand Cru Classe status for a combined 22 red and white wines. Only these 22 Pessac-Leognan wines were allowed to put “Grand Cru Classé” in their labels. Of these 16 wineries, only six wineries were classified Grand Cru in both their red and white wines, and these are Château Bouscaut, Château Carbonnieux, Château Latour-Martillac, Château Malartic-Lagravière, Château Olivier, and Domaine de Chevalier. Ironically, Chateau Haut-Brion Blanc, the white version of 1st Growth Chateau Haut-Brion is not a classified Grand Cru Classe, yet it commands probably the highest value among all Bordeaux whites. While Domaine de Chevalier’s red and white wines are both Grand Cru Classe, the white wine is actually always more expensive than its red — a real oddity in Bordeaux. And I am one to attest that Domaine de Chevalier Blanc is really as good as advertised, having been very fortunate to have tried a handful of different vintages of this amazing white Bordeaux in the past.

ADRIEN BERNARD VISITS MANILA
It was a while back in 2011 when I met Domaine de Chevalier owner Olivier Bernard and his charming spouse Anne at the former Wine Story Serendra branch in the BGC. This time around, I was able to meet the young and very energetic Adrien Bernard, son of Olivier and Anne, at Wine Story’s very recently opened Uptown BGC location. Adrien is the spitting image of Olivier Bernard, but with black hair color not blonde like his dad.

Being a real fan of Domaine de Chevalier, I was really curious to get an update on something Oliver Bernard told me in my 2011 interview. As mentioned above, Domaine de Chevalier is probably the only Bordeaux winery I know which priced its white higher than their red (in the case of the flagship Grand Vin label), and I remember Olivier saying that the Domaine de Chevalier Rouge was underpriced and they wanted to at the very least move it up in the future to match the price of its Domaine de Chevalier Blanc, and eventually surpass that price level like other Grand Cru Bordeaux. But Adrien admitted that it is not happening yet, and he explained it extremely well: “Given that we only have seven hectares dedicated to our whites, and 60 hectares hectares dedicated to our reds, producing an average of 20,000 bottles and 140,000 bottles per vintage respectively, it may take more time for this to eventually happen.”

While many Bordeaux chateaux also produces more reds than whites, and are doing fine with a lower priced white over red, Domaine de Chevalier Blanc is definitely a different case — their white has been much more revered, and eventually it will boil down to supply and demand.

While we live in the Philippines where red wine consumption far overwhelms white wine, if there is one white you should invest in or splurge on, it is no other than the Domaine de Chevalier Blanc.

Thank you once more to the generosity of Wine Story owner Romy Sia. Be sure to check out their new place, Wine Story Uptown BGC, which Romy aptly described as the “Bordeaux Theme Park.” All the Domaine de Chevalier wines tasted above are available for purchase on limited availability only.