If there is one odd winery out (in a good sense) in St.-Emilion, it is easily Chateau Figeac. Not only is Chateau Figeac the largest grand cru classe vineyard owner in this region, it is also the only chateau in St.-Emilion to have a distinct gravel rich soil ideal for Cabernet Sauvignon, while most of the region are in clay and limestone soil. Bordeaux lovers have long talked of left banks and right banks with the Gironde River as sort of the demarcation line. To the left of the Gironde River is the famous Medoc and Graves wine regions known for Cabernet Sauvignon grapes dominating the blend, while to the right, there is the Saint-Emilion region, known for Merlot being the majority grape of the blend. Chateau Figeac is an anomaly of the region, and has been called the “most Medoc’’ like among the right bank chateaux, something that has in fact worked for the highly sought wines of this estate. I had my first Chateau Figeac in the early 2000s when the price was still quite good. At present for the same price, I can only afford the Figeac second label, the Chateau Petit Figeac (formerly Chateau La Grange Neuve de Figeac) – though still a very good wine. Chateau Figeac is a Grand Cru Classé B in the St.-Emilion Wine Classification which started in 1955 (amended 1958), and is among the 18 Chateaux in the Premiers Grands Crus Classés list from the most recent 2012 classification. Unlike the 1855 Bordeaux Medoc Classification which continues to stand the test of time, the St.-Emilion Classification is mandated to be updated every 10 years or so. The 2012 Classification replaced the controversial and legally challenged 2006 classification. 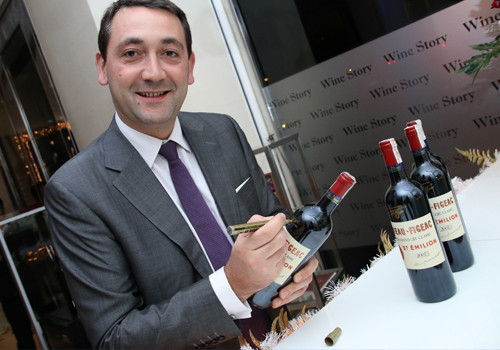 In another intimate and exclusive wine dinner hosted with more frequency as of late by Wine Story in Serendra, Chateau Figeac’s young and aggressive managing director Frederic Faye flew in from Bordeaux to talk about the Chateau and the four hand-picked vintages for the dinner affair. Frederic at just 33 years old is probably the youngest managing director of any big name chateaux. Frederic is also the first non-family member to be named the managing director since the de Chevremont/Mononcourt family took over Chateau Figeac in 1892. Frederic took over the position from Eric d’Aramon, the son in-law of St.-Emilion legend Thierry Mononcourt. Eric d’Aramon was the anointed successor of Thierry Mononcourt but made a surprising exit after almost 25 years in the chateau. Frederic Faye is a Chateau Figeac internally honed talent, having been with the chateau for around12 years now, and was employed by the winery almost since graduating from university. He had ascended up the ranks and previously held key positions as vineyard manager and technical director prior to getting the coveted top honcho job.

Frederic was very candid in admitting the Mononcourt family was disappointed that in the last classification of St.-Emilion in 2012, Chateau Figeac did not get a promotion as the family has envisioned since the time of Thierry Mononcourt. On the other hand, previous Premier Grand Cru Classé B co-equals Chateau Pavie and Chateau Angelus were both promoted to Premier Grand Cru Classé A—joining the prestigious companies of super premium Chateau Cheval Blanc and Chateau Ausone. While the dream of Classé A promotion had evaded Chateau Figeac once more, the winery is not giving up and wants to continue to improve further as evidenced by the hiring of renowned wine consultant Michel Rolland. The irreplaceable Michel has probably consulted for hundreds of winery clients all over the world by now, and results have been impressive, with wines often rated in the 90s by industry demigod, wine critic Robert Parker. As Frederic fondly recalled “I was still a newbie when Michel Rolland was already famous as a wine consultant.’’ Frederic however assured that Michel’s Rolland’s entry will not drastically affect the Figeac style. “I would say that right now, we are 80 percent autonomous of what Michel Rolland will add to our wines.’’ While Michel Rolland’s impact on the Premier Grand Cru Classé A promotion remains to be seen by the 2022 classification, his contribution may be easier manifested on Parker scores, which at present Chateau Figeac seems to be one of the few big name Chateaux not in Parker’s good side.

Chateau Figeac normally blends 35 percent of Cabernet Sauvignon, 35 percent Cabernet Franc and 30 percent Merlot, while most of St. Emilion will be using over 50 percent of Merlot in their blends.

• Chateau Figeac 1998: `Leathery, tobacco leaves, slightly minty, medium bodied, soft  on the palate and café latte finish; while the wine is still fresh, the fruit power seem to have waned’

Chateau Figeac wines are amazingly seductive on the nose, fresh on the palate and long on the finish. This flavor profile is uniquely manifested by the good percentage of Cabernet Sauvignon. It is therefore no surprise that Chateau Figeac will continue to fetch good prices vintage after vintage, and the Premier Grand Cru Classé A upgrade when it comes, would be mere formality to its consistent quality and already impeccable reputation among St.-Emilion elites.

Chateau Figeac wines are available in all Wine Story stores: ShangriLa Mall in Edsa Mandaluyong, Serendra in the Fort, Taguig City, and One Rockwell West Tower in Makati. You can also visit their website at www.winestory.com.ph.

For comments, inquiries, wine event coverage, wine consultancy and other wine related concerns, please e-mail me at protegeinc@yahoo.com. I am a proud member of the Federation Internationale des Journalists et Ecrivains du Vin et des Spiritueux or FIJEV since 2010. You can also follow me on twitter at www.twitter.com/sherwinlao.