Stunning property: Chateau Ducru-Beaucaillou, known not only for its beautiful “stones” in the vineyard but also an impressive modern art collection

Rather than entering into poetic odes about bottles of wine I have always found it more apt to think of each wine as a person in a cocktail party. There are the first impressions. The approach, the style, the look, the first contact … then the conversation that ensues in which their individual personality can shine. Aggressive? Sophisticated? Mysterious? Serious? Complex? Fresh? Affable?

Then comes that crucial moment during the cocktail party schmoozing hour where a decision has to be made: do we continue in this person’s company? Or move on to the next? Have we decided that perhaps this one is worth getting to know more, perhaps becoming a friend or more? Or was it just worth a little flirt? And in some cases (like warm, supermarket chardonnay) you are looking for the first excuse to make a quick exit. “Have you seen where the restroom is?” The evening continues and more often than not you’ve made at least one new friend — a reliable standby whose charm made the entire fete just a little more pleasant.

As with any party there is also the post-event. Did that person leave an everlasting mark? Will you make an effort to get in touch? Or chalk it up to an ephemeral moment? Even the following day the effects still linger. Are you waking up with fond memories leaving you rosy-cheeked, or with a bitter aftertaste and a tremendous headache? There are also those “coyote uglies” — delicious and delightful at the moment but leaving you miserable the next morning. Yes, I’ve had one too many of those. Cheap and cheerful ice-cold rosé? 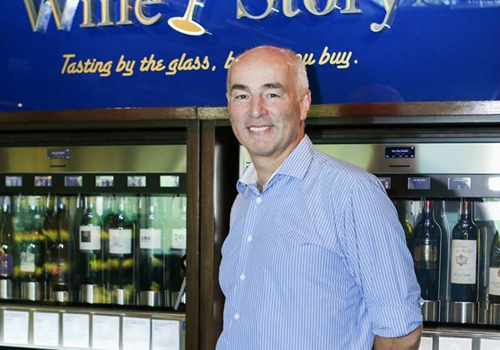 I have never, however, asked a winemaker to do the same until I met Bruno Borie of Chateau Ducru-Beaucaillou. A very easygoing man with a relaxed energy and a hint of maverick, he was once described by Bruce Schoenfield of Wine Spectator as looking more “like a Parisian artist than a businessman, and nobody else in Bordeaux…The idea of such a nonconformist running one of Bordeaux’s top properties seems to trouble some of his peers.”

The property was once known as a sort of bachelor pad with Keith Haring pop art and a glassed-in room overlooking the Gironde River. In recent years, however, he has wholly embraced the idea of family, embodied both in business and his personal life. He now is married and a proud father, but that mischievous charm and energy from his bachelor days shines through his passionate description of his wines and his candid thoughts on the region and his work, resulting in an outstanding winemaker who truly understands the balance between trend and tradition.

Chateau Ducru-Beaucaillou from the Saint Julien Region of Bordeaux is available at Wine Story.

THE PHILIPPINE STAR: Did you always know you would enter the family business?

BRUNO BORIE: You always have this challenge. I don’t know for females, but of course for the boys, we always want to prove to our fathers that we are not as stupid as they think we are.  So you try to do your own thing and then hope all of a sudden he will consider you and be happy to consider you. But also he never forced us into the wine. Also in the 1950s and 1960s the situation was very difficult in the region so he had no reason to force, but also perhaps it is like with my son now. I would like to make everything possible that he can join the business but not force it.

Yes, because if we try too hard it could go the opposite way, correct?

Definitely! It is something I am testing now because I waited a long time to have a child and now he is six years old and I am 58. I say to myself and to my wife, this is wonderful! Instead of having this typical father-and-son fight, I will be more like a grandfather to him! So he may not necessarily want to kill me! I will make everything possible for him to have access, and if he wants I will be very happy.

Your background is rather unusual in the wine industry, coming from the liquor business. How did you apply this?

I started as a wine merchant in Bordeaux simply because that was what was offered to me after school. In fact, that is when I first came to the Philippines in 1982! But I learned how to sell and export different wines. Then I purchased Lillet, which is completely different. Even though it is still liquid, it is still alcohol; it is totally different. But it gave me this opportunity to really develop a brand.

This is quite a challenge for the French wine industry in the global market, right, building a recognizable brand?

Everyone is jealous of the success of Mouton Cadet. At the same time it is very difficult. I’ve always found that it is very difficult to be alone. We are obliged in any line of work to follow a bit the trend but in a place like Bordeaux where there is 100,000 hectares, six million hectoliters of product, and 99 percent of the wines sold in the names of chateaus, it’s very difficult to be that one percent sold as a brand. People aren’t used to it in the stores, in the restaurants. In the Champagne region they do quite well at this.

Yes, there is a lifestyle aspect to Champagne.

Yes, it is no longer wine, they sell bubbles. They sell a party. Even in the Duty Free you can see that wines are always treated separately from Champagnes and spirits. Those are more like cosmetics, but the wines are different.  We sell a whole selection.  It’s difficult and a pity because I think Bordeaux could come up with some brands and it would eventually be very useful for the region.

What is unique about Saint Julien?

One aspect, an appellation that is 900 hectares and divided between 11 crus classes and most of them are larger chateaus. They often say that Saint Julien is homogenous in its quality, but I say it’s more in its intention to always do its best. Since Chateau Lagrange, Talbot and us, until the smaller properties, we all want to do our very best. It’s not the case everywhere; some want to just make money or have a quick return on their investment. There are no real investors in the region; it’s all families. The only notable one is Suntory with Chateau Lagrange, but they run it just as a family business does. It’s long-term and they are happy. So what you have in Saint Julien is that there are few chateaus and they are all family-owned or family business-owned. Which certainly gives you a unique approach and this idea that they all want to make the best.

Could you describe your vintages like people? Who would they be?

I think it’s very interesting how you say “they,” because they change from one year to another. It’s a great idea! However, I am a man, so it’s much easier for me to take a feminine comparison and I hope you will excuse me!

The 2009 vintage was a very ripe vintage, almost exotic with round body and very fleshy. I thought about Beyoncé with beautiful round curves. I mean, she’s not skinny, but beautiful curves. Very sexy, very attractive and very upfront. She got the supreme score from Mr. Parker. The 2009 also won during a blind tasting organized by Wolf Blass for the best Cabernet Sauvignon blend and just recently in a blind tasting in Tel Aviv. So, yes! Beyoncé is very sexy!

The 2010 is extremely serious. It has a very academic construction but it’s a masterpiece and I thought of the most cathedral-like star and I thought of Charlize Theron. Blond, tall, not the most friendly, she needs to be warmed a little.

The 2011 I thought about Nicole Kidman. Why? Because it is a kind of … not exactly a redhead or blond, not immediate but she is extremely attractive. Once you take enough time to consider her, to see her play.  This vintage is extremely rich and powerful, a little misunderstood by the press but has a huge potential if you give the 2011 a little chance to express herself she becomes a star. Kind of like Kidman, who is not always a success but in the right setting and consideration, all of a sudden like when she is wearing that red dress, she is unbelievable!

2012 and 2013 were also very interesting because they were more porcelain-like constructions and I thought of a Chinese actress for the 2012. It’s not massive, its very elegant, slinky style, beautiful and silky, so I thought of Fan Bing Bing. 2013 it’s a little less powerful, but has a beautiful length and very perfumed and I thought of a Japanese icon, the model from Kenzo perfume. You have this beautiful girl in the middle of a poppy field. I thought she was Japanese but she is in fact Taiwanese, Su Xi.