The road to Grand Cru Classe A

CHATEAU ANGELUS never got into the elusive and exclusive Premier Grands Crus Classés level until in 1996. But in less than two decades, Chateau Angelus made history of sorts by being the only Saint-Emilion chateau to jump from being one of 63 Grand Cru Classé wines at the start of the inaugural 1955 Saint-Emilion Classification, to one of only 13 Premier Grand Cru Classé B when promoted in 1996, and now to the ultimate pinnacle level in the latest 2012 classification — equivalent to the first growths, the Premier Grands Crus Classés A, joining erstwhile Saint-Emilion A-listers Chateau Cheval Blanc and Chateau Ausone, and fellow newly promoted Chateau Pavie.

So there was really no coincidence that Chateau Angelus made Grand Cru Classé B in the 1996 Classification, and then this remarkable feat in the 2012 Classification — all happening at the time when Hubert de Bouard was at the helm.

WHEN THE NEWS BROKE
I had my second one-on-one interview with Hubert de Bouard de Laforest in the last eight years. There is no better brand ambassador than the owner and wine maker himself making the sales pitch, and Hubert was as charming, passionate, and accommodating as one can get.

Both my interviews were arranged by no other than my fellow hardcore oenophile, the classy Romy Sia of Wine Story. The first interview was in 2010 prior to Angelus’ promotion to Premier Grand Cru Classé A, and just last month, I had the honor once more to catch up with Hubert, after the 2012 Classification. While in my first interview with Monsieur de Bouard I delved more into Chateau Angelus’ meteoric rise to fame from the 1990s onwards, and its high price tags that came with the fame, this time I was more focused on the emotions and the effects of the 2012 recognition.

Q: Take me to the day when you received the news that Chateau Angelus had been promoted to Premier Grand Cru Classé. When was this? And what happened then?

A: It was Sept. 6, 2012, a Thursday, when we received a letter saying that we made the Grand Cru Classé A classification. Prior to this day we had no idea. The classification results were kept extremely confidential. I remembered that I had two sleepless nights anxiously awaiting the news, and, of course, when we found out of our promotion I was overwhelmed with joy.

I was born and raised in the vineyards of St. Emilion, and to be recognized by the French government — and consequently by the world — that Chateau Angelus is among the first growths [of the] stature of Chateau Lafite, Chateau Haut-Brion, and the very few elite names is an unbelievable honor. Everyone in the winery was filled with emotions. While many of my friends suggested we celebrate by opening champagne, I actually decided to immediately call a meeting among our people.

I really feel that we now have a bigger responsibility to continue to perform and be at the top of the quality game.

Q: What was your general feeling about your chances of getting Classé A prior to receiving your official and formal promotion?

A: To be honest, we knew two years earlier that we were among the candidates for possible promotion, but then I was not really confident it could happen. After all, since the first Saint-Emilion Classification in 1955, no winery had been promoted to the Premier Grand Cru Classé A. And while I am 100% convinced that our wines are as good or, as many critics and sommeliers are saying, at times even better than Chateau Cheval Blanc in some vintages, I do not know how members of the Classification Commission under Institut National Des Appelations Origine (INAO) and the French Ministry of Agriculture, would appraise our wines and decide on the fate of our candidacy. I am extremely happy we got the promotion. 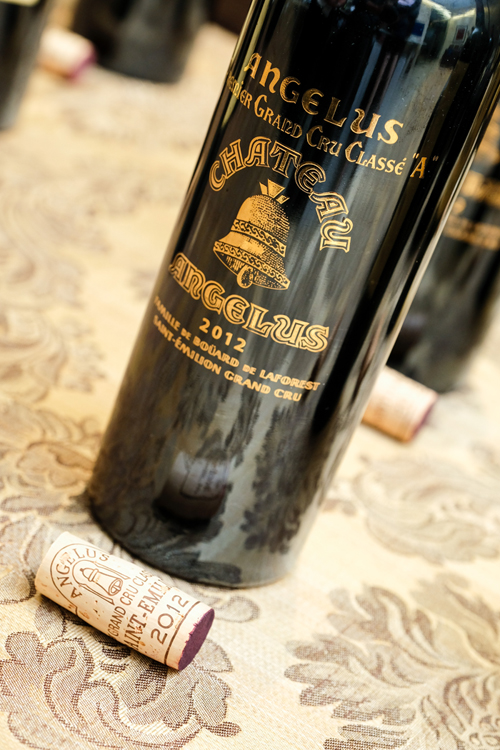 Q: 2012 was a very historic year for Chateau Angelus. Is that why you decided to do a special edition label and bottle for your 2012 vintage, with this black bottle with gold-imprinted lettering?

A: Actually we did this commemorative bottle and label for 2012 for three reasons, but of course the first one is because of our promotion to Classé A. Aside from the classification, we also had two other important milestones.

One of them is that my daughter Stephanie de Bouard-Rivoal joined the winery on this same year, after spending six years in London in a private bank. As you know, it is always good to have a family member continue the tradition, so Stephanie will the 8th generation family member to take over.

The third reason is because in 2012, we also started our major renovation that took us three years to complete… (I interjected a follow up query and asked if the renovation was because of the Classé A promotion, and Hubert acknowledged my question and continued …) The planning for the renovation was in fact [started] way back in 2005 and had nothing to do with the classification. As you know, Saint-Emilion is a World Heritage site and we needed two years just to get government permits to renovate. Also, we had some changes on the original plan with the architects, involving details that took some time to resolve, but we finally started the major renovation in 2012. 2012 was indeed a very special and memorable year for us.

A: Life continues. I still believe we are already doing the best quality wines possible and this work will have to be sustained. But the most important thing for me is if my consumers are happy with our wines. Since we got the promotion, we received so much feedback from all over the world. We received congratulatory notes from restaurateurs, sommeliers, and our general consumers — everything was positive. While there is added pressure because now we have to be the best all the time, I am confident we can live up to this reputation.

On a personal note, the classification has not changed my lifestyle as I still live the same way, I still travel and visit my customers, and I still go to work at our cellar almost every day.

While there was still some controversy — maybe because of jealousy, and perhaps Bordeaux politics, as obviously this classification is a huge deal, and also has serious commercial implication and unquantifiable prestige — there is no denying that Chateau Angelus, leading to 2012, was already among the most sought after Bordeaux right bank brands, and its prices were already higher than many of their fellow Classés B chateaux prior to the new classification.

This Classé A classification only solidified Chateau Angelus’ position in the hierarchy of quality wines, but to us consumers, it sadly has meant more money to shell out for an Angelus wine from 2012 onwards.

Multiple vintages of Chateau Angelus including larger formats are available only in Wine Story stores: Shangri-La Mall in EDSA, Mandaluyong; Serendra in The Fort, Taguig City; and One Rockwell West Tower in Makati. You can also visit their website at www.winestory.com.ph.

The author is a new member of the UK-based Circle of Wine Writers. For comments, inquiries, wine event coverage, and other wine-related concerns, e-mail the author at protegeinc@yahoo.com. He is also on Twitter at twitter.com/sherwinlao.