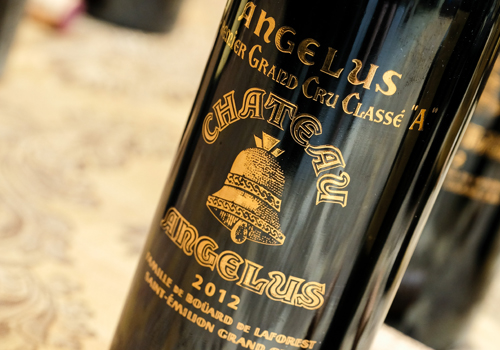 The special 2012 vintage of Chateau Angelus comes in a commemorative black bottle with gold embellishments.

The first time I wrote an article devoted to Chateau Angelus was sometime in 2010, when savvy businessman and Wine Story founder Romy Sia invited me to meet and interview Bordeaux and Saint-Emilion icon, as well as Chateau Angelus Managing Director Hubert de Boüard de Laforest.

The next official Saint-Emilion classification would come in 2012, and this time there was less controversy as the head agency supervising the classification, the Institut National De L’origine Et De La Qualité (previously Institut National des Appellations d’Origine or INAO) took a different step by outsourcing the tastings and inspections to independent groups with no involvement in the Saint-Emilion and the Bordeaux wine trade and opted for wine professionals from other notable French wine regions like Burgundy, Rhone, Champagne, Loire and Provence to make up the deciding commission.

Chateau Angelus and Chateau Pavie came out the biggest winners in the new 2012 classification, as both chateaux joined original Premier Grand Cru Classe A Chateau Cheval-Blanc and Chateau Ausone at the pinnacle of the Saint-Emilion wine ranking. Chateau Angelus pulled a Chateau Mouton-Rothschild (when Mouton-Rothschild became the first 2nd growth to move to 1st growth in 1973 from the Medoc Bordeaux classification of 1855) in Saint-Emilion and took just 57 years while it took Chateau Mounton-Rothschild 118 years.

POST PREMIER GRAND CRU CLASSE A STATUS
I was once more invited by Mr. Sia to a private event with visiting Chateau Angelus Brand Ambassador for Asia, Bong Grelat-Tram. Of French-Vietnamese descent, the affable Ms. Grelat-Tram, who joined the chateau in 2013, holds a master’s degree from Bordeaux University. I got a chance to sit next to her during an intimate 10-person Chinese dim sum lunch at the Summer Palace restaurant in Edsa Shangri-La, Manila.

While I was first and foremost excited about the different vintages of Angelus wines I would be tasting, I was also looking forward to find out how Chateau Angelus changed after receiving Premier Classe A status. For Chateau Angelus to be promoted to this level is akin to a person being knighted as a lifetime honor and, at the same time, winning the lottery.

There were indeed changes as Miss Grelat-Tram told me that 2012 was a transition period as there was a literal changing of the guards. Mr. de Boüard’s daughter Stéphanie de Boüard-Rivoal, an eighth-generation member of the family, officially took over the property. Mr. de Boüard, who was the biggest brand champion of the Angelus and Saint-Emilion wines, can now step back and take a lesser role as all his work came to fruition with his chateau’s promotion to Classe A.

At the same time, the chateau also underwent a two-year, €10-million renovation. Recently completed, it involved the construction of new cellars and facilities that will all Chateau Angelus to produce the same consistent wines from their gifted terroir, vintage after vintage.

Finally, to commemorate the 2012 Grand Cru Premier Classe A promotion, Chateau Angelus released a special black bottle with real 21-carat gold-imprinted lettering and decoration for their 2012 vintage. Ms. Grelat-Tram said the 2012 vintage symbolizes many things, including 230 years of Chateau Angelus history, the entry of the eighth generation, the latest renovation, and, of course, the accomplishment of being among the best of Saint-Emilion wines.

Tasted at the lunch were the following vintages:

• Chateau Angelus Saint-Emilion Premier Classe 2012 — ‘the lovely crafted commemorative black bottle is surely going to be a hit among wine collectors; even though this is not among the hyped vintages in Saint-Emilion, the wine is actually very aromatic with opulent berry fruits, chocolate, very intense, fresh, silky on the palate, peppery, but surprisingly quite drinkable already, with luscious ripeness dominating this very rich long ripe finish’

• Chateau Angelus Saint-Emilion Premier Classe 2011 — ‘more complex nose, meaty, figs, burned coconut, jammy, creamy, huge on the mouth feel, fresh, good acidity, still with so much to show as the wine continues to evolve in the glass, strong cassis at the end; my favorite among the three wines being tasted’

• Chateau Angelus Saint-Emilion Premier Classe 2006 — ‘very ripe, black currant, black tea, vanilla, some herbaceousness, tannins are sweet and grainy, medium bodied, black cherry on the round finish; drinking quite well now, and this was delicious when paired with the Summer Palace sweet and sour pork — no kidding’

Chateau Angelus has always been top-of-mind among the wines from the right bank of Bordeaux. I have been hearing about it ever since I entered the wine industry over two decades ago. The wines have been consistently good, and though I don’t get to drink Chateau Angelus as regularly as I have wanted to, every single vintage I did get the chance to taste never failed to deliver a quality, power, sophistication and complexity that is truly enthralling.

Prior to the promotion to Premier Grand Cru Classe A, Chateau Angelus prices had already been climbing based on its growing reputation and improving en primeur performance. The official 2012 recognition only further increased the prices, and that is sadly my only selfish beef with Angelus’ highest classification, as now it is even harder for us mortals to buy Chateau Angelus.

Chateau Angelus wines from the above vintages, and other vintages are available in all Wine Story stores: Shangri-La Mall in Edsa Mandaluyong City, Serendra in The Fort, Taguig City, and One Rockwell West Tower in Makati City. You can also visit their Web site at winestory.com.ph.

The author has been a member of the Federation Internationale des Journalists et Ecrivains du Vin et des Spiritueux or FIJEV since 2010. For comments, inquiries, wine event coverage, and other wine-related concerns, e-mail the author at protegeinc@yahoo.com. He is also on Twitter at twitter.com/sherwinlao.